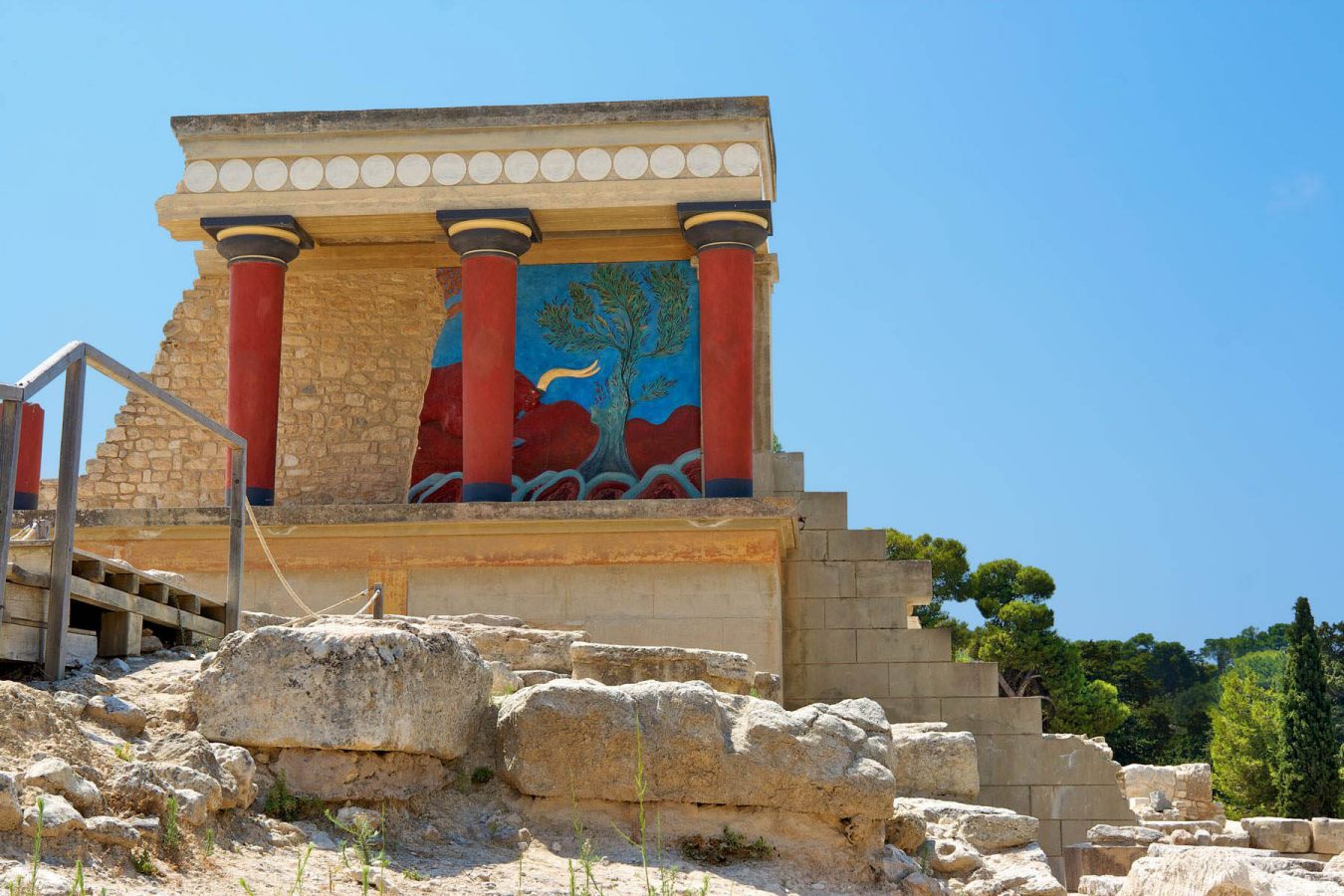 Knossos, the famous Minoan Palace lies 5 kilometres southeast of Heraklion, in the valley of the river Kairatos. The river rises in Archanes, runs through Knossos and reaches the sea at Katsabas, the Minoan harbour of Knossos.

In Minoan times the river flowed all year round and the surrounding hills were covered in oak and cypress trees, where today we see vines and olives. The pine trees inside the archaeological site were planted by Evans.

Constant habitation for 9,000 years has brought about great changes to the natural environment, so it is hard to imagine what the Minoan landscape was like.

Knossos, the 1st and 2nd Palace

The first settlement in the Knossos area was established circa 7000 BC, during the Neolithic Period. The economic, social and political development of the settlement led to the construction of the majestic Palace of Knossos towards the end of the second millennium BC.

Knossos was the seat of the legendary King Minos and the main centre of power in Crete.

This first Palace was destroyed circa 1700 BC. It was rebuilt and destroyed again by fire, this time definitively, in 1350 BC. The environs of the Palace were transformed into a sacred grove of the goddess Rhea, but never inhabited again.

The Palace of Knossos is the monumental symbol of Minoan civilisation, due to its construction, use of luxury materials, architectural plan, advanced building techniques and impressive size.

The first large-scale excavation was undertaken in 1878 by the wealthy art-lover Minos Kalokairinos, while Crete was still under Turkish occupation. Kalokairinos excavated part of the West Magazines and brought many large pithoi (storage pots) to light.

In March 1900 to 1931, Sir Arthur Evans excavated not only the Palace but the whole surrounding area of Knossos. The Palace complex was excavated in only five years, an extremely short time by today’s standards.

Evans restored the Palace with concrete, a technique condemned by modern archaeologists as arbitrary and damaging to the Minoan structure. Excavations continue and a conservation programme is underway to halt the deterioration of the Palace.